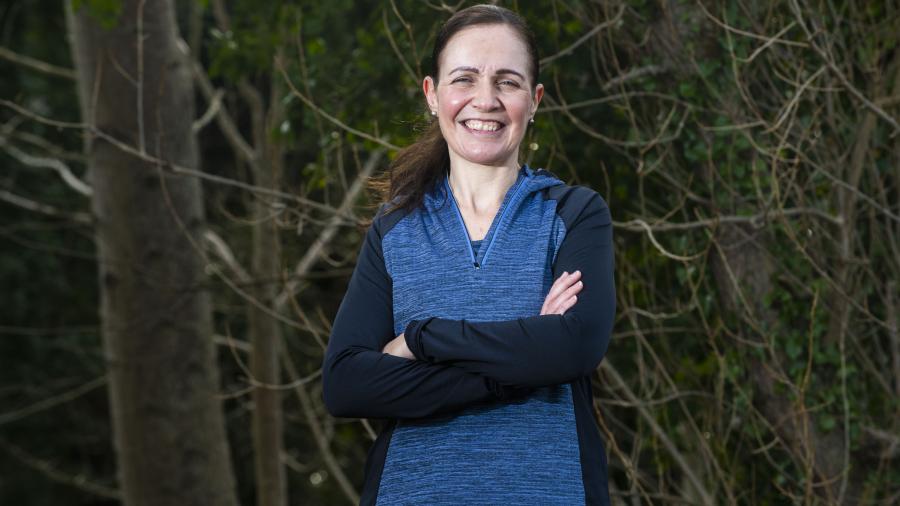 Running has restored a mother’s self-belief and provided an identity for her disabled son.

Sinead Tighe (47), from Dublin’s Tallaght, is a full-time carer for son Daniel, who has a rare genetic condition, Sotos Syndrome, and is non-verbal.

But both now complete the Dublin City Marathon with the help of Daniel’s jogger buggy and he is a regular participant at the disability-inclusive Parkruns at Tymon Park, which Sinead established.

Also mother to Shauna (16), Sinead took up running after her GP expressed concern at her anxiety.

“I had Daniel when I was 33. For the first two years I did not know where I was. I remember asking ‘what is wrong with me?’ I wondered if I had post-natal depression,” said Sinead.

“I did not know what was ahead. No-one knew. I would look at Daniel and wonder, what is going to happen? Because all we were being told was what would not happen.

“I have to commend my GP. He said ‘Sinead, you are full of anxiety’. He asked me what I did to relax, and I said I walked, but it did not make me feel any better. He said ‘Sinead, will you do me a favour and try and run?’”

Now a prolific runner with Brothers Pearse AC, Sinead’s journey back to sport began in 2008.

“I was a 35-year-old social jogger. There is a huge difference between what I was doing then and what I do now.

“I started to run two kilometre laps. When I got a bit more confident, I started running a 5K loop.

“I was thinking, ‘this is great, I am motoring’. Then I heard about the Marlay 5K Parkrun. I did my first one in 25 minutes. The next Saturday I did it in 24 minutes, so all of a sudden, I was chipping away.

“Then a Parkrun began at Tymon Park, nearer to my home. After a couple of years of doing it consistently, I joined a fitness group, did the odd 10K and my first Dublin City Marathon in 2014. I never wanted to run again after that.”

But soon she was running with her son.

“We got a new large buggy for Daniel which I could jog with.

“I was walking with him one day, and because I was getting better at running I had more confidence. I thought to myself, there are times when I need to be with Daniel, but I also want to run.

“I wondered if I ran with Daniel would he like it?  So I started to run a little bit down the road. When I stopped, there was a big smile on his face. He loved it.”

So Daniel started to participate in parkruns with Sinead in 2016.

“He got a bar code, which meant you could see Daniel’s time and my time on the timesheet each week.

“I was delighted. It was the first time I could see Daniel with an identity outside our home.  I felt he was going to have something in life.

“When I looked at other boys playing outside, it would break my heart. Hopes we had for him were not going to be fulfilled.

“But all of a sudden we were connected through this. It was a joy to see how happy he was.

“Also, it was socially very important for us as a family to be out in the community with Daniel. You feel a stigma if you are in your house all the time.

“It was great to bring Daniel out and show people what he was like. He still loves the parkruns.” 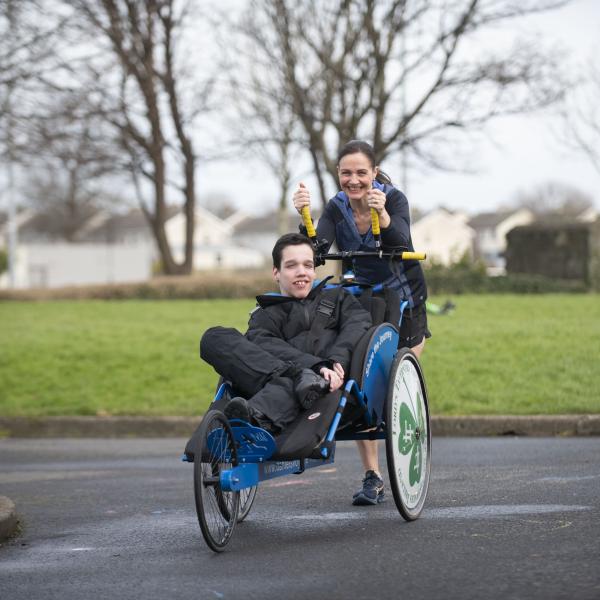 “I can work out all sorts of issues while running which I might do very differently, more aggressively, if I hadn’t been for a run. I would not function as well if I did not have running.

In 2017, Sinead and husband Keith were fundraising to adapt their home when they decided she would run the Dublin City Marathon with Daniel.

Amazingly, Sinead and Daniel recorded a better time than her 2014 solo effort.

The family raised €106,000 and profiled Sinead as a campaigner on behalf of carers, earning her the Tallaght Person of the Year award.

With the help of South Dublin County Council, she established a disability inclusive parkrun at Tymon Park.

“The council donated a jogger buggy, and so did we, so that parents could run with a child with a disability.

“Parents have bought their own jogger buggies and we now have five other children with a disability running at Tymon Park, along with people who are visually impaired and have autism.

“Children with a disability also help out as stewards and timekeepers.”

“I am Daniel’s mother, carer and advocate. I am his everything. As well as giving Daniel an identity, running has given me an identity also"

Keith pushed Daniel – who attends St Joseph’s School for the Visually Impaired in Drumcondra - in the 2018 Dublin City Marathon. In 2019, a group of five, including Sinead, took turns to push him 2km each.

This year, their virtual route took the team around Tallaght, finishing at Tymon Park.

“I am Daniel’s mother, carer and advocate. I am his everything. As well as giving Daniel an identity, running has given me an identity also.

“You think you’re going to have two kids and a perfect family, but all of a sudden, here was something I could not control.

“I can work out all sorts of issues while running which I might do very differently, more aggressively, if I hadn’t been for a run. I would not function as well if I did not have running.

“I am glad that I have shown our daughter Shauna that when things change in your life, there are ways to navigate that.

“Running brought me back in to the community. I was very lonely. When I was with my friends, I didn’t have anything to talk them about anymore. We weren’t relating to the same things.

“Now I have different friends through running and we relate to the same things.

“And it has brought Daniel an identity. People understand his condition. He sees the same people each week at Tymon Park, and he knows them.

“It has helped his social development. Looking at Daniel when he is being pushed, he is so, so happy, the stimulation it is giving his brain must be fantastic.”