Sport Ireland has today congratulated Ireland’s Aifric Keogh, Eimear Lambe, Fiona Murtagh and Emily Hegarty on taking bronze in the medal in the Women's Four final at the Sea Forest Waterway in Tokyo.

The Irish quartet showed great determination in difficult conditions as they battled back in the final 500m to claim a historic medal for Ireland, the first of the Tokyo Games.

Chairman of Sport Ireland Kieran Mulvey said: “This was a truly inspirational performance by Aifric, Eimear, Fiona & Emily, who become the first Irish female rowers to win an Olympic medal. In what was a thrilling battle for the bronze, they held their nerve to deliver Ireland’s first medal of the games. Irish rowing continues to go from strength to strength, a testament to the hard work and dedication of both athletes and support staff alike.

Sport Ireland Chief Executive John Treacy added: “Visibility is a key pillar of Sport Ireland’s Policy on Women’s Participation in Sport; today’s excellent performance and the coverage it receives will no doubt inspire a future generation of rowers, as Ireland continues to grow its reputation as a force in international rowing. On behalf of Sport Ireland I would like to congratulate the team on what is a truly fantastic occasion for them, their support team and their family. I would also like to congratulate all at Rowing Ireland on this wonderful achievement.” 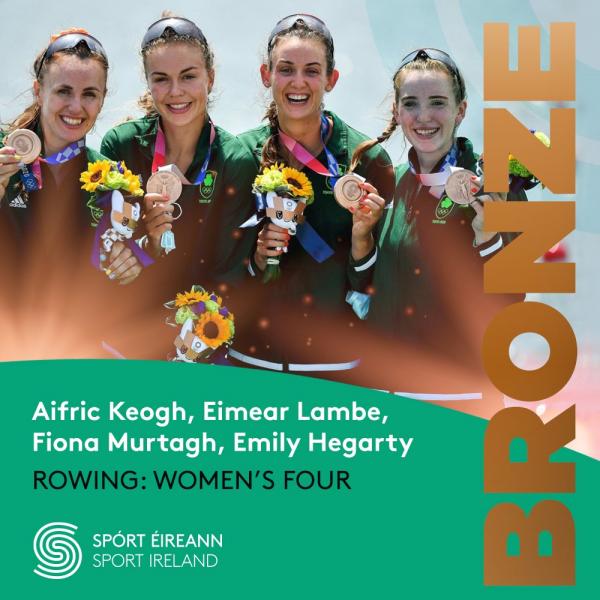