"We woke up early on the day of the games, full of excitement to get going and see what was waiting ahead of us. We made sure we had the bags packed for the beach.

We took a walk around Ventspils to loosen up and grab breakfast and take in the city before we headed off to the games. The meeting was called for 10 am and we were first to arrive, eager to get started.

The meeting began with the explanation of the rules for the games. They had used our pack as the demonstration pack so we knew we were starting at station 6. This was not a great starting point as that was the recommended break point for lunch so we had to motor through all the stages and eat after we were done. That was no problem for us, we were going to make the best of it. The meeting finished and it was time to make our way to the beach.

We arrived and waited for the organisers to bring us down to the stage to get us briefed again with the local families. Before we went off to the stages they put on a zumba dance class on the stage and most of the families joined. Unfortunately we didn't participate in the dancing. The kids were getting in the zone of the games.

So off we went to our opening stage. We were that focused we didn't even notice there was a waterpark at this stage

This Stage was a simple game of matching the squares. There were 16 squares and 8 pictures and all we had to do was match them. The game was based on Speed and Memory.

Emily went first and could only turn one at a time and had to tag one another in to match them. We started slow and couldn't match after the first eight tries, but then we clicked and we quickly got the matches with time to spare. A great start for Team Ireland. The excitement really was built up for the next stage.

We moved onto this game where the advice was to watch the family before you and see if you could pick up tactics, to which we did. This was a game of accuracy and patience.

In this game there were eight balls in the square, all different sizes and the objective was to throw a hool-a-hoop that was tied to a piece of rope and we had to retrieve the balls over the endline closest to us. You couldn't go out over the square or there would be a penalty.

We started great on this and were flying through it. We had five over within  the first minute and were really getting the hang of it. Unfortunately Emily’s Hool-a-Hoop came off the rope and sat it out for the rest. We had the one ball left. Nathan was pulling it back in nice and cautiously until Dylan decided to throw his at the same ball and get it over the line.

Was it for security or was it for glory we may never know but we had completed the task and that was another great stage for us.

This was a game of accuracy and counting. The objective was to throw two golfs that were connected to a small rope at a ladder with three rungs (Top Rung - 3 Points, Middle Rung 2 Points & Bottom Rung 1 point.) Our total had to add up to 11.

Each of us had two balls and had to throw it at the ladder to stick them on the rungs. This was harder than it looked but we went straight in. It was tough at the start but we got into a rhythm and eventually we got them to stick. We got three 2-pointers to stick and four 1-pointers. We only had one ball left and it was up to Dylan. The time keeper said that we only had one chance left before time ran out, so our hopes of completing this task lay on Dylan's last shot.

… He absolutely NAILED IT! We had completed this task on a buzzer beater. Onto the next." 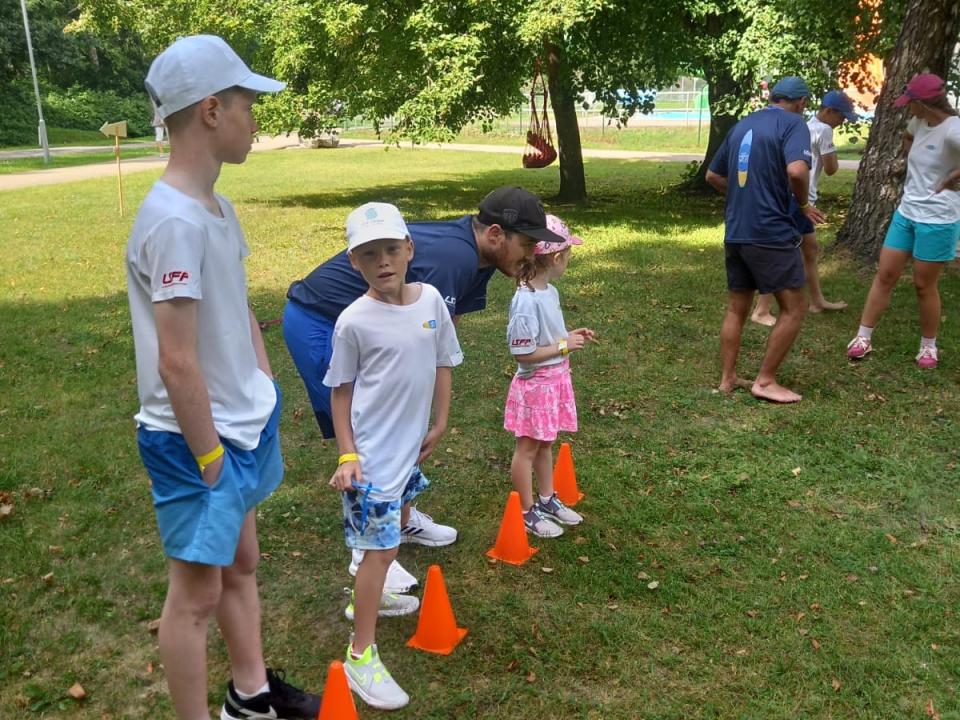 This game was to get your raft across a pond and back again. There was a chain to pull yourself along. The main thing with this coordination and power. Nathan went at the back of the raft and I went at the front with Dylan and Emily in the middle.

"We got off to a flier and got to the other side quickly. Then we had to turn around and we got a little disoriented as we had to change roles and I was at the back. But in the words of Paul O'Donovan “We pulled like dogs” so much that I caught onto Dylan's glove and it went flying off into the lake but that didn't slow us down and we got back to the finish line in a good time. We were flying ready for the next stage.

This was a simple accuracy game. There were five crates positioned beside each other. The outer creates were worth 1 point and the inner was worth 2. We had two tennis balls and three frisbee’s to get in the targets.We had to make them stick. This was not my game and I failed to register a score. Nathan was on fire scoring the team 9 points for our overall score of 10. We did good and moved onto the next.

Due to the long queue of competing families at stage 11 the organisers said we should move to stage 12, Footgolf. This was about accuracy over power. Emily went first and set Dylan up nicely where he set Nathan up to get it as close. Everyone played great shots and I was set up but I left it short. The ball stopped dead in a divot at the hole. Emily tried to get it out but it rolled out and got stuck behind the flag and Dylan finished it off. Spirits were still high, so we went to the previous stage where it had cleared up and gave us time for a breather.

This game was all about communication and getting the right sequence. So we decided as a team that Nathan and Dylan would go down and Emily and I would direct the sequence. We were handed two sheets of paper with a sequence on it and we had to communicate this down to Nathan and Dylan.

We absolutely smashed this. We got it in a very good time. Even the event organiser was impressed at how quick we got it. So we are now onto the water for the next stage." 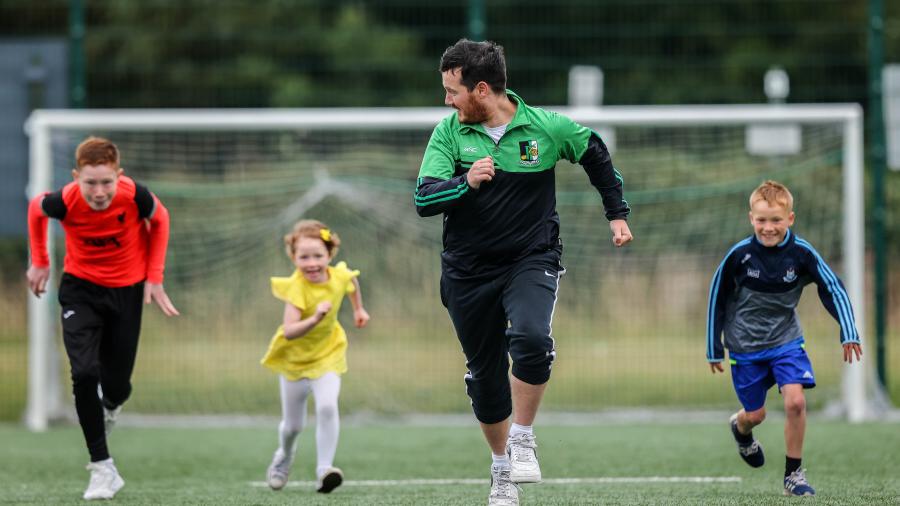 This game was the only water event. This event was supposed to be all of us but the waves were dangerous for this event so they altered the rules. The new objective was that I was to pull Nathan on a paddleboard around a buoy and back.

This was very difficult and required the most fitness. Dealing with waves and the ground below that was uneven. We flew out of the traps here but as I got to the buoy and a big wave came crashing towards us. Nathan stayed up on the board and we got around it, got the paddleboard secured and back to get a good time. We were happy to get this out of the way and get going on the next.

This game was a difficult one as we were blindfolded and had to direct a fish magnet to a metal fish and guide it to pick it up and place it on another pad. This wasn’t great for us. The first two minutes were blindfolded and we didn’t do well, but the last minute we got it as we were allowed to take off the blindfold. We got it done and now moved onto Nathan's strongest task.

This was exactly as it sounds. We got three shots each to score a goal from distance.There was a swirling wind and the ball was very light so it took off in the wind.

Nathan scored on his third go and held the record briefly for his age group. The rest of us were not as lucky. Nathan was sure he was going to win until another competitor stepped up and scored on his third go. This was arguable as Nathan felt he was marked wrong. The competitive side came out there but nothing could be done. No VAR in this year’s beach games. Maybe the next one? We were almost at the finish line. Two more stages left.

This game was by far the most difficult. You had to balance all four boards at the same time for five seconds. The boards were on logs. We really did give it our best try. Emily fell off and hurt her knee but was determined to get back on. She was the only one to balance the board but she fell again and we had to put an end to this task and put it down as a DNF. Unfortunately it was one stage that we couldn't conquer and swiftly moved to the next.

We arrived at our final task, not to be too down from the last one. We had a look at the team before us and studied how they were doing it. So we decided that it would be Nathan & Dylan to be blindfolded and get around the obstacle course. Dylan had memorised the course and flew through it and we had directed Nathan to go straight. We got through it fairly quickly and we were happy with our time. The event was over and we were really proud.

We headed off to lunch to reflect on the event. Overall we were happy with our performance and we did all we could. We didn't make the final relay unfortunately but overall it was one of the best family experiences we had done together. So many laughs and high points of the event.

I really couldn't have asked for better teammates. Despite being disappointed at not making the final, we were grateful for the opportunity and time spent together with the family! "