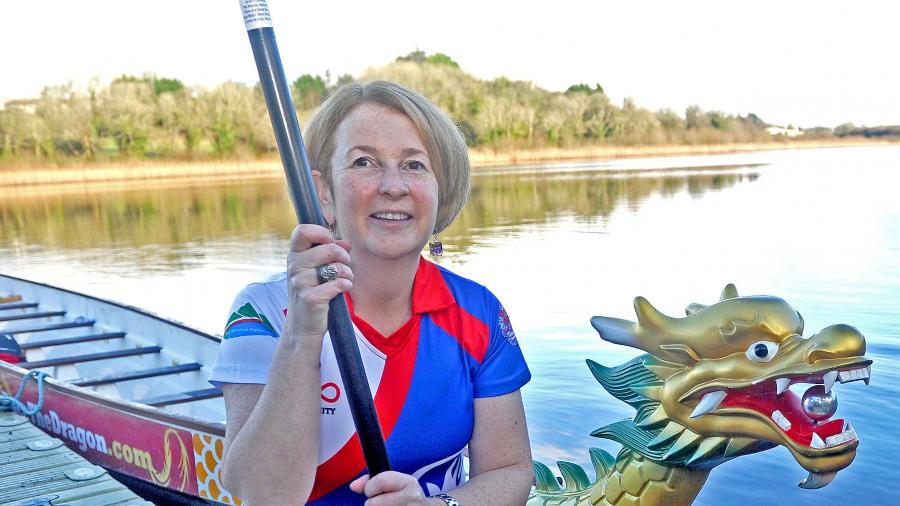 “My life is not the same as it was before, but it is better”

A breast cancer survivor who founded a dragon boat club to provide an exercise outlet for other recovering women, says her experience ultimately changed her life for the better.

Visitors to Lough Lannagh, on the edge of Castlebar, Co Mayo, can watch members of the Gráine Mhaol Dragon Boat Club paddling their 42-foot, 20-person boats with a drummer setting a pace on the bow.

The paddling action helps prevent and alleviate the symptoms of lymphedema, a condition caused by removal or damage to lymph nodes as a part of cancer treatment.

Club founder and lymphedema sufferer Louise Killeen (52) tells a compelling story of illness and the role of physical activity in her recovery. “I wanted to get it going because I could see it was needed. Everyone I asked to get involved was very keen to help,” said Louise.

“There was emotional and social support for cancer survivors, but the physical exercise element was lacking. It can be nice to challenge people if it increases their self-worth. I know it sounds strange, going through cancer was very tough, but I would not be the person I am today if it didn’t happen. My life is not the same as before, but it is better. I know that is not the way it is for everybody, but it is my experience".

“There are a few people with us who are not cancer survivors and are there purely for the psychological benefits, which are huge. You can see how they can grow socially in a very short space of time. And the water can be so calming.”

Mother to Tim (20) and Sintayehu (14), Louise found a lump on a breast six weeks after Tim was born. “I thought it was pregnancy related, so Tim was six months old before I looked into it. Because was I was only 32, the initial thinking was that it was nothing serious. But it was cancer. I had to have a full mastectomy, followed by chemotherapy.

“Recovery was quite good initially and after finishing my treatment, my breast care nurse asked if I would be interested in looking after the cancer patients at Mayo General Hospital, who needed wigs. She knew I had been a hairdresser, so for eight months I did that voluntarily.

“But I began to notice death notices in the newspaper for a lot of people I gave wigs to. I found that very, very difficult. It really brought me down. So I had to give it up for a while.

“Three years later, the role became vacant again. I took it on, but only on a temporary basis. I was afraid I would get depressed again. But I did not and am still doing it today. I love it.”

“So a support group for younger women with cancer was developed and two years on it became a cancer choir which has been running since 2008.”

In 2015, it occurred to Louise that a physical element was also needed. There had been a walking group, but participation fell off.

“I met a friend who told me about her involvement in dragon boat racing and thought ‘that is something my gang would really benefit from’.

“It is all about getting people’s confidence up. Out of something very bad came something really good.”

“Because I had the contact details for so many former patients, I was able to call a meeting, which attracted 62 women, to listen to Julie Doyle of the Irish Dragon Boat Association.

“Julie told me about how to get a boat and the other equipment we needed. I contacted a boat supplier in Southampton in England in May. I thought it would take six months, but they had one for us in June.

“That meant we had to raise the funding for it very quickly, but the response was fantastic and gave me the confidence to keep going.” 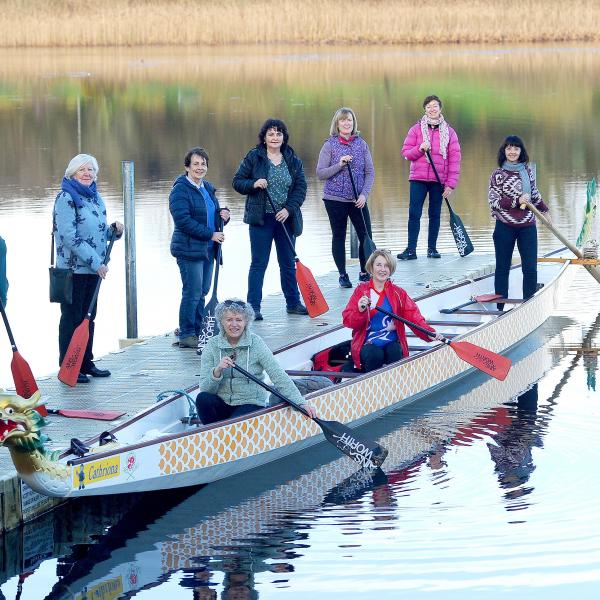 Now, between 40-50 women take to Lough Lannagh to train in two boats using a clubhouse, pontoon and water compound, as well as enjoying regattas across the country.

“At the start, my husband Michael thought I was crazy, but I knew it was very doable.  I am a bit of a lone ranger when it comes to projects, I knew there were friends I could call on, but first I needed to get the first boat. The whole experience has been extraordinarily positive.”

The success of the Gráine Mhaol Dragon Boat Club has promoted the establishment of similar groups in Connacht, though the pandemic curtailed activity in 2020.

“A lot of our members are not great swimmers, but they can float,” laughs Louise. “It is all about getting people’s confidence up. Out of something very bad came something really good.”